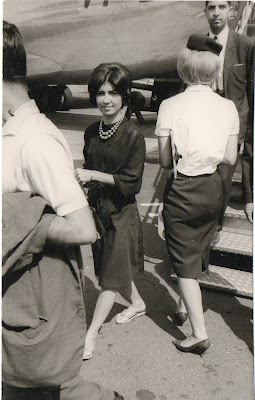 And back to Tehran after a week in London on our way home, where I found the city, dull, grey, ugly and depressing comparing to the US. This view changed dramatically once I setteled in London and the city changed over years, into a modern, beautiful metropolis while Americal cities deterioated in shape and structure.


Here I am at Tehran airport, more mature and grown up from so much experience. walking to meet my family and tell them all about it. My $200 pocket money bought a lot of presents for every one and new out fits for myself to wear in my new job as an English teacher. Or so I thought I would be for the rest of my life!
Posted by Rouhi Shaffi at 08:42 No comments: 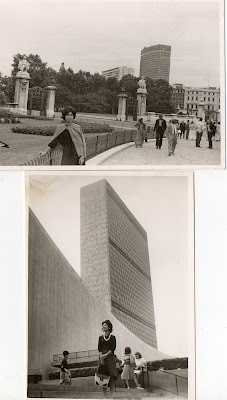 In New York away from the United Nations building.


On our journey through the east coast we stayed in New York for a week. We were taken to the UN building for a tour. We went to Radio City cinema and watched recent Doris Day movie.


And closer to the building.

We walked the streets of 'the city that never sleeps' until 4 am and enjoyed every moment at the Times Square. If I ever were to choose among cities, I once thought to myself, living somewhere other than Tehran, It would be New York. Later, London replaced Tehran when I lost the city in the turmoil of history.

Posted by Rouhi Shaffi at 08:32 No comments: 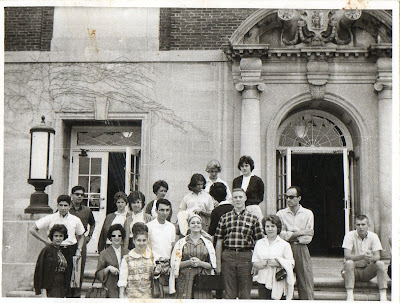 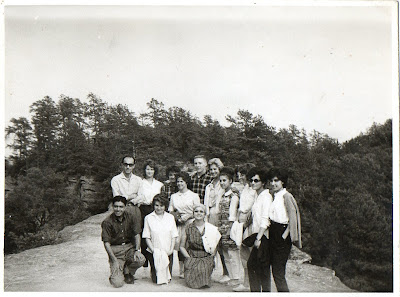 The photo on the top was taken on the natural bridge in Kentucky, where two mountains are connected by this huge bridge. 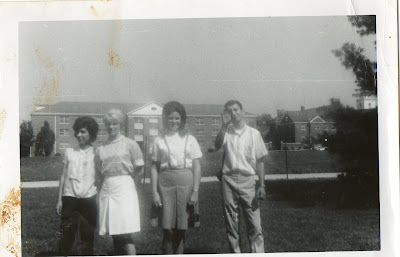 This photo was taken in front of the student's dormitory at the university of Kentuckey.

Posted by Rouhi Shaffi at 08:09 No comments: 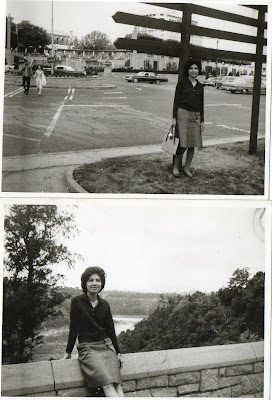 We were being taken to Niagara Falls on the Canadian side. These two pictures were taken there. We descended down and took the boat which ferried people as close to the falls as possible. We were given raincoats to prevent us from getting wet but that didn't stop the mascara running down the face of one of the girls in our group!


Here, the Falls are behind me. I visited the place on several occasions but nothing compared to the first trip and the wonderful feeling we had to see the giant Falls.
Posted by Rouhi Shaffi at 08:03 No comments: 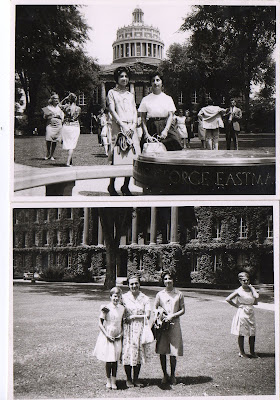 These pictures were taken on the grounds of Rochester University. I met this lovely Iranian girl there whom I took this photo with. Wish I remembered her name!

Second photo is Mrs Rad, me and another girl. While we stayed at the university dormitories we made friends with the students. One day we were asked to make an Iranian dish for the whole group. It landed on me and Mrs Rad to do all the work. The other boys and girls in the group were too mischievous and declared their incompetence to contribute. The dishes we made found a lot of admirers and for once since arrival we felt proud to be Iranians. Here we were also interviewed by some local papers. Photos of Mrs Rad and I were published in those papers.

Posted by Rouhi Shaffi at 07:52 No comments: 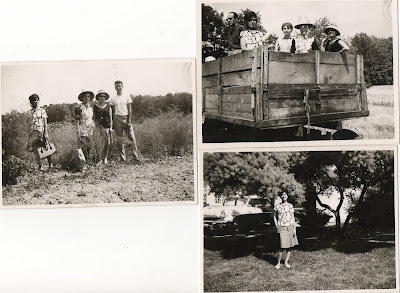 Across the East cost by Grey Hound. We went to Rochester in New York State and stayed with families. Sometimes we were taken to the farms to see agricultural developements; cord fields, cows and American rich farmers life style. Here we are going to a farm by a truck and out there somewhere.
It was there that I decided I never want to live in America. Most people we met were too ignorant of the outside world and we were tired of explaining and making ourselves understood.
Posted by Rouhi Shaffi at 04:57 No comments:

Travelling across the East coast of the US, 1963 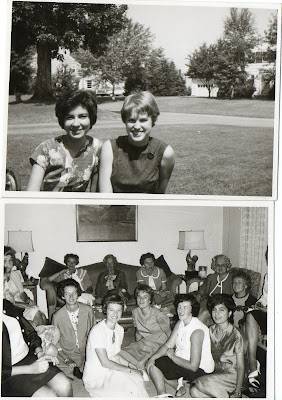 We landed in Boston and were taken to a campus where hundreds of other youths had arrived from other destinations. As my English was better than the others, right from the start I had to play the role of translator. I had just completed my BA in English and was one of the best students in the class. Nevertheless, when we arrived in the US I understood how little I knew of the language. But I was a fast learner and quickly managed to understand and speak with the American accent.

During our journey, we travelled more than 800 miles mostly by bus. It was decided that we stayed with families who already had our life history and chosen us to be their adopted child for the period of one month to a week. In Rochester, in the State of New York we were scheduled to stay for a whole month. I was welcomed at the bus station by a Mrs Spies who was my "mother" and at home and was introduced to her husband and daughter, Carol who was my age: 21.

Their son was away in a campus so I saw him just as I was leaving the family. The Spies were middle class Americans. Very kind and hospitable. They treated me as their daughter and took me everywhere they went.

Mrs Spies asked me to call her mother which I did and soon Carol and I felt like sisters and enjoyed each others company so much that worried Mother and at the end wanted to know why Carol didn't want to see her boyfriend and spent so much time with me!

However, the one photo shows dear Carol and I. the next photo was taken at a party they called "Shower". I am sitting on the floor on the right and Carol is in the middle. "Shower" was held fpr brides where every one brough presents and womken gathered to view them and celebrate.

"Mother" often took me to her club where she played gulf. I had to sit and watch her and sometimes just doze off. We drove to places in Carol's car and once went to a amusement park where I rode one of those crazy machijnes and decided not to ever do it again. Carol and I corresponded with each other for alomst 3 years after I returned. After that our communication stopped and I never heard of her again although I went to the US on many occasions.
Posted by Rouhi Shaffi at 04:35 No comments:

Here is a new beginning, a new chapter in my life. A few months before we finish college and graduate from Teachers Training College, our English professor informed the class that a scholorship was available for those who are interested to attend and pass the exam to go to the US for a summer programme. He encouraged me to enroll. On due date I went to the examination hall where tens of sudents from almost all universities and colleges in Tehran were sitting to get a chance to visit the US. A dream which at the time many could not believe would come true.
The scholorship was granted by the US and was called "Experiment in International Living". If you passed the exam with high marks, you would go free and all expences were paid. Should you get a lower mark then you had to pay part of the expences in total 50,000 Iranian Rials, equivalent of $ 700.
Fortunately, I was one of the few who passed the exam and secured a place without payment. We were due to fly in mid-June 1963.

At the time, my two siblings lived with me while my parents were faraway in Jiroft. I sent a telgram to my parents telling them of the good news and asked for some pocket money which was arranged ($200). The group of fellow students were introduced to each other. In all, we were 17: 10 men and 7 women from various faculties plus 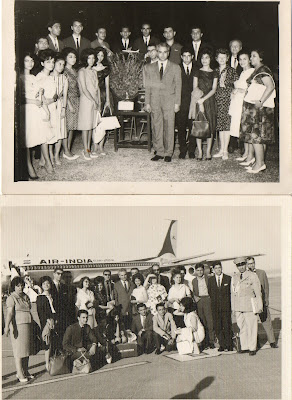 Mrs Rad, our supervisor who had been appointed to accompany us all the way. Mrs Rad, a woman in her mid-thirties, had already been in the US for several years and was well familiar with the country. She worked for an American institute in Tehran. A Mrs Mohtashami ( or Ehteshami) was involved as well but she did not accompany us on the trip.
We were preparing for the unexpected and exiting journey, unaware that the country was in turmoil and political upheavals of June 1963 were underway. That was the time of confrontation between the Shah and Ayatollah Khomeini. That was the time he was ultimately sent into exile only to return 15 years later to take Iran into the abyss of darkness.

There were days when we were taken in a minibus to downtown Tehran to the passport office when we would hear gunshots from the streets but our attention was faraway from the chaos under the skin of town.
A week before our departure, events took a different shape. Suddenly, we were told that we were part of the Youth Organisation in Tehran and a Mr Khodayar, head of the organisation was introduced to us or vice versa (Khodayar was one of the most handsome men of his time). Suddenly, we were informed that His Majesty would like to see us before departure. Suddenly, we turned into a victory card in the hands of the establishment which wanted to announce to the world that Iran was on the way to modernisation and it were the dark forces which stood on her way. Suddenly, we were to play a more cautious and different role and the intial innocent excitement was amalgamated with all these other excitments of going to the court and being introduced to his majesty.
We began to make ourselves nice dresses. I bought a silver grey silk material and took it to the tailors to make me a skirt with a jacket.

On the evening of june 4, 1963, were were taken to the Sa'adabad Palace in northern Tehran in a minibus accompanied by Mrs Rad and Mr Khodayar, now a familiar face among us. We were taken to a room and a butler brought us tea which we drank while making fun of our situation.
After a while we were taken to a hall and stood in a row for His Majesty to shake hands with us. We were already instructed to demonstrate our respects by revering when His Majesty approached us.
The Shah entered the hall, a much smaller figure than I had expected. He approached our line and shook hands with us in turn and asked questions. I forgot to do all that and stood smiling at him when my turn cam. He stood there more than necessary and asked me several questions as to which faculty I study and what I want to do in my life and etc. The photographers were taking photos which were later usde in the publicity machine against the Khomeini propaganda. One of the photos above this post was taken on the day we met the Shah.


The next day we left for the US by Air India. One of the photos above was taken at the airport. The Air India aircraft can be seen in the background. Mr Khodayar and a military officer can be seen bidding farewell to us. From left, Mrs Mohtashami (can be Ehteshami), me and others.

What I was informed later was the fact that my siling photo with the Shah decorated the front pages of all daily papers the next day! I was given copies of those papers but lost them in the course of time. I am certain that atleast they exisit in the Etela'at Newspaper archives.

We landed in Boston after a long flight and our exciting, memorable journey started from there.

Posted by Rouhi Shaffi at 03:21 No comments:

Labels: An unforgetable trip to the US
Newer Posts Older Posts Home
Subscribe to: Posts (Atom)