We are herded to welcome the prime minister Eqbal 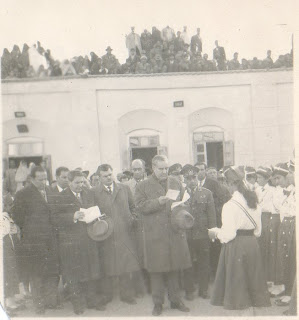 We were ordered to have our best uniforms and line up on the street to welcome the prime minister Mr Manuchehr Eqbal. Here, Zahra Assadpour is reading a welcome note while Mr Eqbal is reading another note.

Posted by Rouhi Shaffi at 14:27 No comments:

A picture of grandmother, aunt and her husband's family

A picture to remember: from left standing Showkat khanum & Eshrat khanum my aunt's sists-in law and aunt Iran. Sitting: left aunt Iran's mother-in-law always well-groomed with eyebrows lined straight and grandmother Bibi Atieh. They are well-dressed as if for the New Year celebrations. I am not sure whether the photo was taken in Shwkat khanum's house or my aunt's. 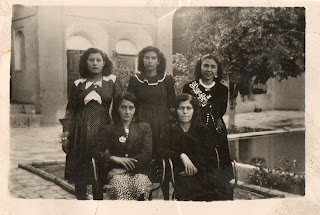 Posted by Rouhi Shaffi at 14:20 No comments: 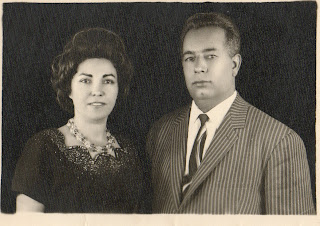 My aunt Iran and her husband Mr Sadjadi in the old, happy days of 1950s.
Various photos of aunt Iran, her children and Mr Sadjadi's family. 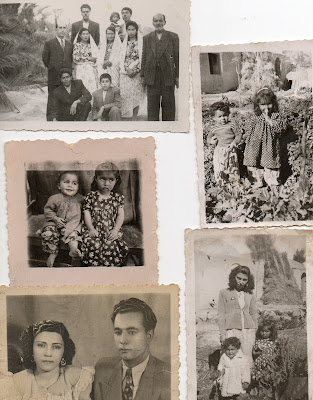 Posted by Rouhi Shaffi at 11:01 No comments:

A happy marriage after the end of high school 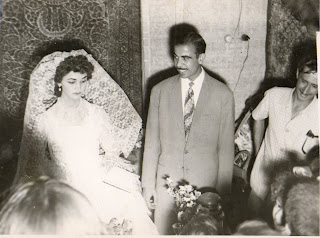 As the story goes students and teachers might fall for eachother and get married and here is one example. Mr Mortazavi, our natural history teacher decided to ask the hand of one of our fellow students, Zahra Assadpour who was the best in our class as well. They got married as the photo demonstrates. Zahra belonged to one of Bam's aristocracy with her father a well-known man. Later they moved to Tehran where I never saw her. She had few children and her 19 years old son was tragically killed while studying in England in the early 1980s. She was so devastated that she wrote a book in which she lamneted for her loss and the sad life she had lived as a woman. She became well-known as a Kermani writer.
Posted by Rouhi Shaffi at 10:53 No comments:

Last days at high school. We had a final exam which was strictly supervised by the education authorities. This photo was taken on 20 June, 1960. We are sitted in rows in a way not to be able to cheat. I am in the front. Mr Deljuie, head of Education Department is watching over us. 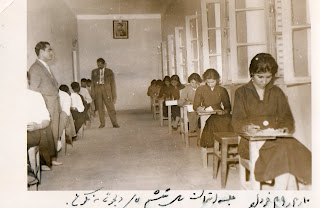 I was ill for part of the year. I was down with an unknown fever for three months in the winter of 1959-60. My aunt Iran and Grandma bibi Atieh took care of me but the doctor couldn't diagnoise my illness. I was so skinny and weak that at some stage they thought I might die so grandma wrote to my mum asking her to come over from Jiroft. She came in distress with my 25 days old baby brother, Massoud wrapped in a bundle. She was bewildered and in loss to see me in that state. Slowly, slowly I recovered and decided to take part in the final exam. I was a good student and passed the final year with 17 out 20 marks final score.

Posted by Rouhi Shaffi at 10:41 No comments:

The American in town 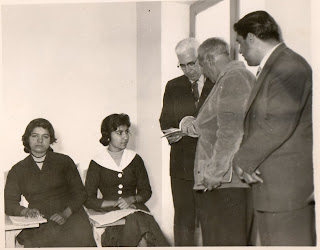 The American from Point4 is inspecting our work in class. This is after I welcomed him in English. Sitting beside me is my best friend Zahra Foroumand. I am wearing a new model of uniform!

Posted by Rouhi Shaffi at 10:38 No comments:

I welcome the Americans in Bam!

As my English was good ( I loved the language and to learn more, I often memorised words from the dictionary), I was often chosen to speak on behalf of school when a foreign dignitory came to Bam. Here is me welcoming the American deligation from Point4 programme. Beside me is head of Education department, Mr Deljuie. On the far right is the American and beside him some one very polite! Even an army person is seen in the picture! Must have been an important occasion in Bam! 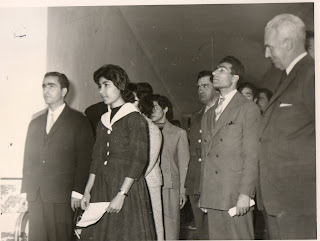 Posted by Rouhi Shaffi at 10:28 No comments: 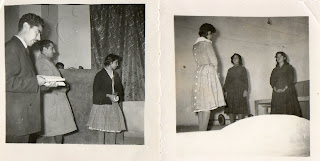 Another occasion in the townhall. In the first picture from the left, Aliakbar Saidi Sirjani our Persian literature teacher, Bam's governor and me. The governor gave me a certificate for reciting poetry and I am leaving the scene.
The second picture is taken while the three of us are performing in front of the audience. My hair is quite short and my uniform a different style. It must have been my last year at high school which was 1959.
I must add a few word about Saidi Sirjani. In mid-1950s he came to Bam from Tehran after he finished his literature degree at the university and was employed as Persian literature teacher. He was a poet and while at the university, he fell in love with a fellow student and wrote passionate poetry about her. He was almost (or certainly) kicked out of university for the scandal he created in the 1950s Tehran. After a few years teaching in Bam he returned to Tehran, still a mad poet who later married and became a distinuguished poet/writer in Iran. After the Iranian revolution as a critique of the regime he was imprisoned and murdered while in custody.
Posted by Rouhi Shaffi at 10:14 No comments: 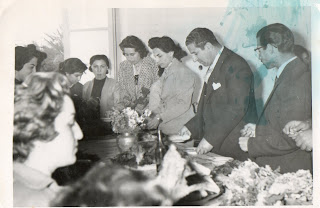 We often cooked meals or sweets and the school invited education authorities and town's ladies to taste our skills. I suppose it was important in those days that we learn cooking and home making. in this picture, I am at the far end with aunt Iran. Other ladies are teachers and the man with white kerchief is head of Education Department in Bam.

Posted by Rouhi Shaffi at 10:10 No comments:

An evening of literature in the townhall (Bam) 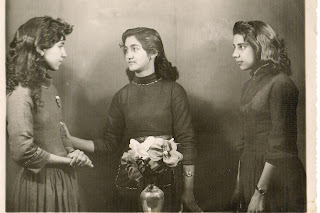 An evening at the twonhall in the presence of about 300 town dignitories. We are reciting Persian poems from ancient texts in a theatrical form. To perform on that night we had to practice for days, memorising every line. I permed my hair with hot rolers borrowed from aunt Iran for the occasion. Zahra Assadpour and Jaleh Amanpour have made their hair as well. We were not allowed any make up. As it looks I was skinny like a stick.
Posted by Rouhi Shaffi at 10:03 No comments:

We, the distinguished students.

We are the distinguished students of our class on year 4 of Parvin high school. From left to right: me, Fereshteh Amanpour, Jaleh Amanpour, Zahran Assadpour and Zahra Foruman with our English teacher, mrs Gerami.
In those days English teachers were regarded highly as they spoke a foreign language. 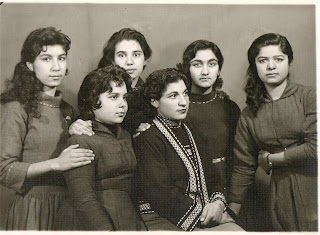 Posted by Rouhi Shaffi at 09:58 No comments: 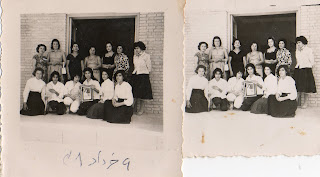 More pictures from the tennis tournament. Picture taken of our team with town's dignatories. Aunt Iran is standing on the left.
Posted by Rouhi Shaffi at 09:52 No comments:

I won a trophy for playing tennis

I started playing tennis when I was about 16. We had recently moved to the new building with a tennis court and a few of us started prcticing. To play with teachers who were good at the sport and available I had to go to school very early in the morning and play about an hour before classes would strat. At the end of two years prcatice we had competitions and I won a trophy which was Princess Shanaz's (the Shah's older daughter) photo, nicely framed. Other girls in the photos played tennis as well. I never knew what I did with that trophy. Nothing is left of that special event except these photos. As if the wind took away what was in the past and left particles of memories behind.

Posted by Rouhi Shaffi at 09:43 No comments:

A new arrival in town 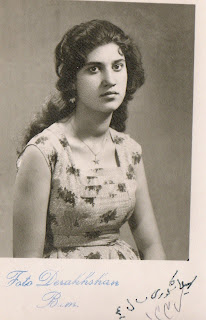 Soheila Shokuri at year 4 of Parvin high school. In 1957, Soheila from Tehran accompanied her brother to Bam. Her arrival at the city stirred an uproar as she was a liberated girl who walked on the streets unveiled, approached jigolo boys who lurked around girls high school and we, the small town girls wouldn't even dare to look at them. She spoke of boyfriends and gave boys whom she fancied rippened, red apples with love messages carved on them. Bam's apples in late spring were famous for their scent and sweet taste. Soheila was friendly, passionate and a new breeze to Bam's old traditional atmosphere.
Posted by Rouhi Shaffi at 09:34 No comments: